Skip to content
Home Uncategorized The transition of the Kazakh alphabet to the Latin alphabet: away from Russia?

The planned translation of the Kazakh alphabet from Cyrillic to Latin, planned by President Nursultan Nazarbayev, caused a great resonance in society. How can the language reform turn out for Kazakhstan?

History of the issue

For reference: this is not the first change in landmarks in the history of Kazakh writing. VIII-X centuries are marked by the transition from the Orkhon-Yenisei writing (Turkic rune) to the Arabic script, which finally supplanted the Turkic rune by the 13th century. With the advent of Soviet power, the complicated Arabic script was abolished, and in 1929 the Latin alphabet was introduced. Then, by order of Stalin, Kazakhstan was reoriented to the “Russian” course, and in 1940 the modern Cyrillic alphabet of 42 letters was adopted. The topic of the translation of the Kazakh language into the Latin graphic system was publicly raised at the XII Assembly of the Peoples of Kazakhstan in 2006. And in December 2012, in a message to his people, Nursultan Nazarbayev announced that the main steps for the transition would begin in 2025, but preparatory work is already underway.

Motives for the transition
The country’s leader Nursultan Nazarbayev explains the need for the transition by the dominance of the Latin alphabet in the communication space. According to him, it is important to turn the culture of Kazakhstan into an equivalent segment of the planetary cultural space. In 80% of the countries of the world, Latin graphics are used, it is the language of computer and telecommunication systems, and Kazakhstan’s introduction to the Latin alphabet will open up new opportunities for integration into the world community, strengthen the country’s position in the international arena. In this sense, the idea of ​​transition is in line with the general trend of globalization.

However, many experts believe that this decision is purely political in nature, and its purpose is to distance itself from the Soviet past, sever ties with Russia and emphasize the sovereign independence of Kazakhstan. At the same time, Nazarbayev himself does not belittle the importance of the Russian language in Kazakhstan and repeatedly emphasizes that the legacy of 70 years of common history will not go anywhere. According to him, the transition is due only to the internal need for the development of the national language.

However, the country’s culturologists believe that no reforms will diminish the importance of the Russian language and the Cyrillic alphabet in a country where the Russian population is the second largest ethnic group (over 20%).

Potential benefits and losses
Since the day this topic was raised by the president, discussions about the innovation have not subsided. Their opinions are expressed not only by experts, but also by ordinary residents, actively discussing the transition on the forums. Kazakh youth are already rewriting in the Latin alphabet, which cannot be said about older and especially rural residents. The population was divided into two camps: some support the arguments of the supporters, the other the arguments of the opponents.

Latin graphics will contribute to the strengthening of Kazakhstan in the world arena, meets the idea of ​​creating a single economic space.
consolidation with other countries using the Latin alphabet, culturally and literally.
easier learning of foreign languages, translation from Kazakh and into Kazakh will be much easier.
and finally, linguistic scholars believe that the Latin alphabet is more adapted to convey the sounds of the Turkic languages, including Kazakh. 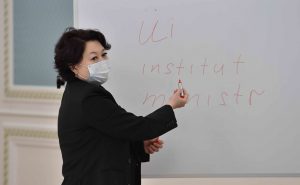 Such a difficult question cannot but have the other side of the coin. Opponents of romanization say that the transition will lead to a break in the connection between generations. According to the writer Kanat Kabdrakhmanov, millions of published books, including educational and scientific ones, will become simply “kindling material”. An open letter from the Kazakh intelligentsia was even sent to the president, expressing concern about the fate of literature published in Cyrillic over the past 80 years. Also, 60 signatories express fears that the number of people speaking and writing in Kazakh will decrease, and this will weaken the position of the state language, which cannot be called strong anyway.

In addition to geopolitical and cultural doubts, adversaries have more practical reasons – the cost of making the transition. Simply changing signs at airports and train stations, replacing signs of educational and cultural institutions, signs with street names throughout the country – this process will result in billions of dollars in costs, not to mention the publication of new textbooks and the translation of existing literature. There is evidence that in the process of a similar transition to the Latin alphabet in Azerbaijan, 70% of the educational budget was spent on reprinting textbooks.

Nevertheless, Nursultan Nazarbayev clearly outlined his position: the transition is inevitable, this is a requirement of the future. According to him, this is a guarantee of entering the world economic and cultural space. Taking into account the successful experience of Azerbaijan and Moldova, the transition should be carried out in a balanced and gradual manner, for some time both alphabets will be used in parallel.